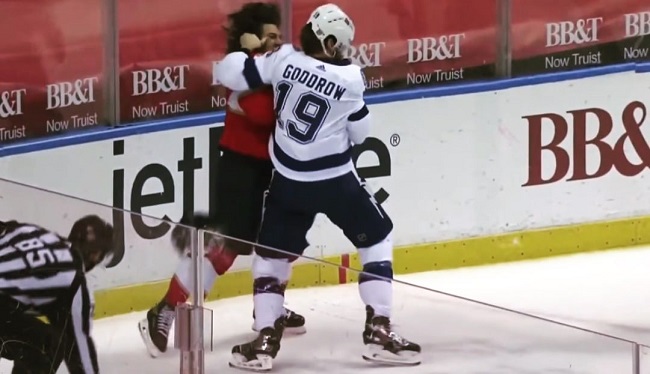 Barclay Goodrow could only go to the ice after Ryan Lomberg stripped his helmet and hammered him in the back of the head Thursday night.

With three minutes left in the first period, Goodrow got a little stick happy when battling Lomberg for the puck. After four good wacks Lomberg decided that was enough, dropped his gloves and started teeing-off on Goodrow.

Goodrow didn't stand a chance. Once Lomberg pulled his helmet over his eyes and drilled him in the back of the head, Goodrow new he had to do something. His only option was to lift Lomberg, slam him into the boards and fall to the ice.

Lomberg was the clear winner and it must of given the boys some juice, because after that they controlled the rest of the game.

The Panthers lit the lamp first,  scoring halfway through the first period, when Frank Vatrano took a feed from Owen Tippett behind the net and put a one-timer past Tampa Bay's Vasilevskiy.

Alexander Wennberg made it 2-0 eight minutes into the second period, with Jonathan Huberdeau getting his 300th NHL assist on the play (he is the first player in Panthers’ history to reach the 300-assist mark). Patric Hornqvist’s hot streak continued as he picked up an assist on Wennberg’s goal as well. Hornqvist set up the play from his own zone, as he took a quick look before sending it down the ice to Huberdeau, who then fed Wennberg on the two-on-one.

Brayden Point cut the Panthers lead in half midway through the second period. But the Panthers were just getting started. Aaron Ekblad potted one to make it 3-1 and Carter Verhaeghe swiftly scored two minutes later to make it 4-1 at the end of the second.

However, Brayden Point struck again when the Lightning went on a power play 54 seconds into the third to make it 4-2.

No other goal was scored during the third period except for Brett Connolly who tucked one into the empty net.

* Panthers' Sergei Bobrovsky stopped all 16 shots he faced at even strength and improved to 5-0-1, his best record through his first six games in his career.