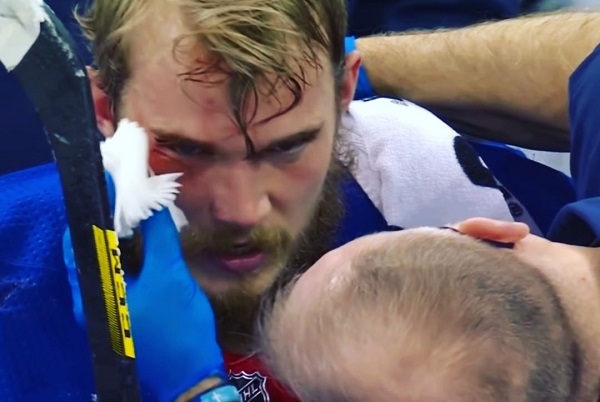 Rangers' Ryan Lindgren came close to losing his right eye Friday Night, when he fell awkwardly into the boards, after a check from Bruins' Jeremy Lauzon.

Lindgren tried to break into the Bruins zone down the right side when Lauzon rode him off into the boards and stripped him of the puck. Lingren became wobbly after the shoulder check, causing his left skate to toe-pick, and sent him angling head first into the dasher board cap.

Lindgren was down but not out, as he chose to stay on the bench and get patched up, rather than, head down the hall to the locker room.

Prior to Lindgren's mishap, the game was a tight affair with tension boiling over multiple times.

After a scoreless first period, the Boston Bruins lit the lamp when Nick Ritchie potted his own rebound for his fifth goal of the season and first at even strength.  Igor Shesterkin made the save on Ritchie’s first shot, but Ritchie collected the rebound, cut behind the net and banked it in off his back to give the Bruins the one, and only, goal of the night.

On the face-off following Nick Ritchie’s goal, Brendan Lemieux and Trent Frederic decided to drop the gloves and dance. The two exchanging some blows, but Lemieux controlled the fight from jump street.

The second period really saw the tension boil over. Jacob Trouba,  hit Jakub Zboril drawing the ire of Charlie McAvoy. McAvoy poorly chose to challenged Trouba, rather than take the power play as a result of the penalty against Zboril, . Trouba and McAvoy exchanged punches, with Trouba getting the better of McAvoy. The officials assessed both players roughing minors rather than fighting majors.

Jaroslav Halak made 21 saves on the night. Halak made 10 saves in the first period, including one on Lafreniere, who batted the puck out of the air while all alone in front of the net. Halak's shutout extended the Boston Bruins point streak to 10 games. This was the first shutout of the season for Halak.

With four minutes left in the second period, Pavel Buchnevich dropped the gloves with Boston’s Jeremy Lauzon. Buchnevich man not be know for his fighting prowess, but he managed to land some decent blows on Lauzon and force a draw. Lauzon got a 10-minute misconduct in addition to his fighting major because he punched Buchnevich when they were down on the ice.

The third period saw the best chance for the Rangers to even the score all night. With a minute left to play the Bruins took a delay of game penalty, shooting the puck over the glass. For the next sixty seconds it was six-on-four and yet the Rangers could not capitalize.