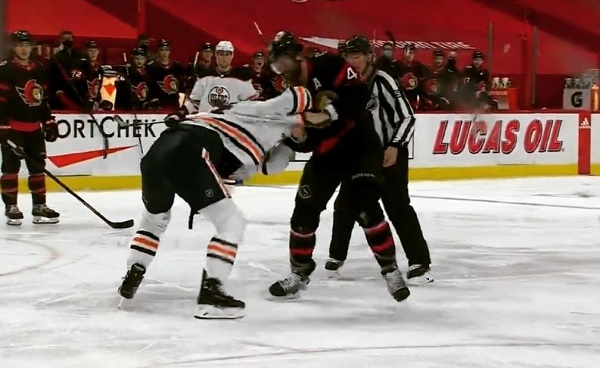 Fists were flying early when the Senators Erik Gudbranson and Oilers Zack Kassian went to war in the first two minutes of Monday's game.

Kassian was trying to goad Tkachuk into a fight during a Oilers offensive zone face-off, but Gudbranson put the brakes on that idea real quick. The moment the puck dropped the two dropped their gloves and squared up.

The two heavyweights engaged like wild lions, flinging fists in all directions with both being just a step ahead of the other. That was until Gudbranson slipped, spun, jumped up and delivered to upper cuts to Kassian. But Kassian quickly moved and used his edge-work to slip every punch that Gudbranson threw after. After Gudbranson missed a huge uppercut, Kassian took over and landed three left hooks to his face.

At this point it looked like Kassian had the upper hand, but Gudbranson would not relent. He tried to regain control but Kassian had his jersey pulled over his head. Yet somehow, call it blind luck, Gudbranson managed to land a right hook catching Kassian in the side of the head.

Now the linesmen has seen enough and went in to break it up, but these two were not stopping. More blind punches were thrown and one of the linesmen took one right to the mouth.

There was no clear winner as both did excellent work, but Kassian went to the back afterwards and never returned.

The Edmonton Oilers defeated the Ottawa Senators 3-1 after Tyler Ennis scored the go-ahead goal early in the third period. Ennis beat Matt Murray during a 2-on-1 for his first goal of the season after Ottawa was caught changing.

The Oilers and the Senators will battle it out again tomorrow at 7:00pm Est.