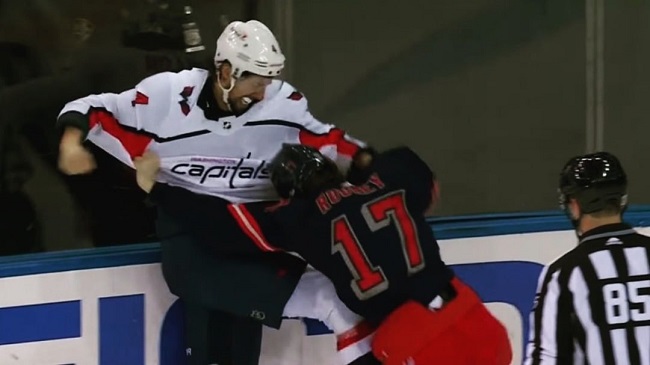 Vitek Vanecek, thinking he was a brickwall, skated to the top of his crease to cutoff Brendan Lemieux's angle of attack as the final seconds of the third period ticked away. But Lemieux clipped Vanecek's skate and then Vanecek did a flop-spin on the ice trying to grab the attention of teammates and refs alike.

Brenden Dillon wanted to fight Lemieux because of the over exaggerated contact with Vanecek, but he couldn't reach him. So he grabbed the only person he could; Kevin Rooney.

Rooney was at a complete disadvantage size wise, but that didn't stop him from fully committing to the scrap at hand. While most of the tussle was a wrestling match Dillon did manage to land a few shots. However, Rooney wasn't going to go down easy-greasy. With a burst of might Rooney scooped Dillon and slammed him off the glass and then the two fell to the ice.

* The Rangers were slated to play Saturday afternoon at New Jersey, but it was postponed due to a COVID-19 outbreak for the Devils. The Rangers will have the weekend off before playing again Monday night.

Other noteworthy news: Alex Ovechkin passed Mike Gartner for seventh on the NHL goals list when he scored his 709th goal 11:01 into the third period. The next player he is likely to overtake is Phil Esposito.