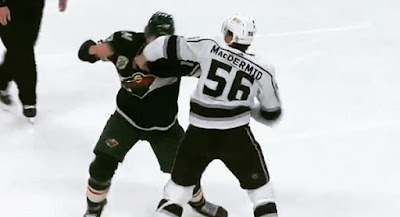 The Wild's Marcus Foligno and Kings' Kurtis MacDermid started the Thursday night match-up off with a literal bang, when they decided to drop the gloves right off the opening draw.

The fight had the desired effect on the Wild and one thing was clear; they weren't losing this game.

Marcus Johansson opened the scoring just 3:33 into the first period with his second goal of the season. Next, the Kings blew it big on an open net, which, saw Kevin Fiala block the shot and spring himself for a breakaway that he rocketed past Quick, putting them up by 2 just 10 minutes in the first. The goal was Fiala’s third goal in four games.

Then Marcus Johansson claimed another point when he set up Kaprizov with a silky, cross-ice pass to cap the scoring at 3 in the first period.

Minnesota allowed Los Angeles back into the game in the second by making a series of trips to the penalty box. The Wild were called for 11 minutes worth of penalties in the first 12:09 of the period.

The worst part of the night, though, came when Fiala was assessed a five-minute major and game misconduct after he accidentally drove Matt Roy head first into the boards. Roy was down for several minutes before being helped off the ice. Fiala was given a 3 game suspension for the hit.

The Wild ended the night by beating the Kings 5-3.