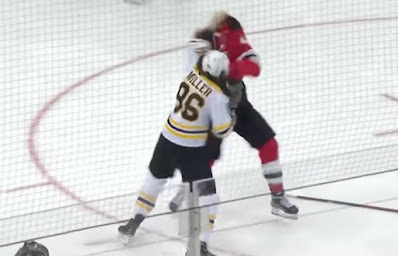 With just 19 seconds played in the second meeting of the Devils and the Bruins, Miles Wood and Kevan Miller dropped the gloves and started chucking knucks.

The fight was in response to the Devils forward running over Bruins goalie Tuukka Rask twice in Boston's 3-2 shootout win over New Jersey on Thursday night.

Kevan Miller was happy to be back in the lineup after he missed the previous 20 months due to injury. Not only did he show there was no rust on his skates, but his ability to answer the bell was still there. He scored a decisive victory and gave the Bruins a much need shot in the arm.

When asked about the fight in a first intermission interview, Wood said, "I respect Kevan. I probably would’ve done the same thing if our goalie got hit a few times. It is what it is and that’s hockey sometimes."

But it was all for not as the Bruins fell to the Devils 2-1.