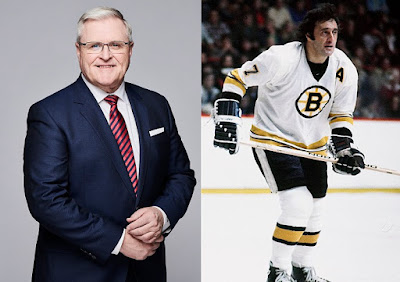 During the 1980s Phil Esposito moved into a GM/ head coach position with the New York Rangers after retiring from play. At that time Bob McKenzie was writing for The Hockey News and he wrote an article about how he believed that Esposito was the worst GM in the NHL. Usually events like this never become anything more than a blip on the hockey timeline, but within a few years these two would come face-to-face resulting in a fight, police being called and charges being filed.

While GM for the Rangers, Esposito earned the nickname 'Trader Phil' because he made more trades during his term than the Vancouver Canucks did during the entire 1980s. This is, most likely, what led into McKenzie writing the article criticizing Esposito as a GM. However, it would be a few more years before this whole thing spilled over.

After moving on from the Rangers Esposito decided that he wanted his own team and when the NHL announced that it would be expanding, Esposito seized his chance. With the backing of investors and the promise of paying the expansion fee up-front, he was awarded the Tampa Bay Lightning in 1992. It was this event that put Esposito on a collision course with McKenzie.

During the inaugural season of the Tampa Bay Lightning Esposito installed himself as Team President and GM. He traveled with the team and tried to be as hands-on as possible. This approach is what put him in the path of McKenzie all these years later.

It was October 15, 1992 and the Tampa Bay Lightning were playing the Toronto Maple Leafs at Toronto. In between periods McKenzie, who was now writing for the Toronto Star, sat down to talk with Esposito. After only two questions Esposito said "I'm done with this, I'm not answering anymore questions" and vacated the room. At the time the Lightning were leading 3-2, but during the third period the Leafs rallied to score 3 unanswered goals and take the match 5-3. Obviously this didn't put Esposito in a good mood and coupled with his early meeting with McKenzie, he was a powder keg waiting to explode.

In the locker room McKenzie showed up to interview players and ask the same tired questions that all reporters ask after a team loses, but Esposito was not having it. He told McKenzie to leave but he refused saying he had a right to be there. Esposito again told him to leave, yet McKenzie said no.

McKenzie fancied himself a tough guy after his friends nicknamed him 'Smokin' after Smokin Joe Frazier, but McKenzie failed to realize that he was dealing with a guy who was not easily intimidated.

Esposito told him to leave one more time and after McKenzie refused, he decided to remove him himself. Esposito started pushing him out the door and McKenzie tried to stand his ground and push back, but Esposito was getting him out one way or another. Esposito took the heel of his hand and blasted McKenzie in the neck, knocking him on his rear. Now realizing the situation he quickly scampered off, but tried to return just a few minutes later. This resulted in a screaming match with McKenzie tucking tail and running off to call the police.

Mckenzie, in a fraught, called the police to report the manhandling that he had just received from one Phil Esposito. The Toronto Police quickly arrived at the arena to charge Esposito for attacking McKenzie, but they couldn't find him. The police gave him a week to provide them with his story of events and if they didn't hear from him they would charge him with assault.

However, the whole thing ended in a wimper after Esposito was forced to write an apology to McKenzie which saw all charges dropped. Nothing more became of the incident and the two had no contact for years.

Recently McKenzie said the two have spoken a few times and are now on good terms. He said "We buried the hatchet a long time ago. It was an unfortunate incident. And I would rather it not have gone to the lengths it went to. We got that squared away. I’m fine with Phil. He’s a good guy. He just got a little carried away one night."