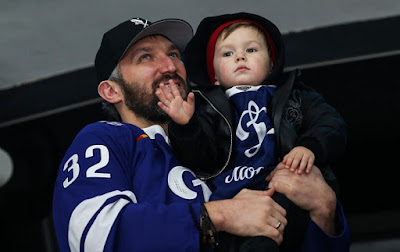 The KHL and the NHL both had to suspend their season due to Covid-19 but their restarts are far from being similar. Nothing highlights that fact more than seeing The Great 8 and his son take in a Dynamo Moscow game with fans in attendance.

Ovechkin was the guest of honor as his former team, Dynamo Moscow, took on the CSKA Moscow (The Red Army).  The team presented him with his old jersey as he took the time to take pictures and sign posters for fans in attendance.

The game itself was pretty one-sided in favor of Dynamo, until CSKA mounted a comeback in the 3rd period. But it was all in vain as Dynamo was able to hold on to the lead and take the game 4-3.

Below is a video of Ovi's time with the team released by Dynamo Moscow.