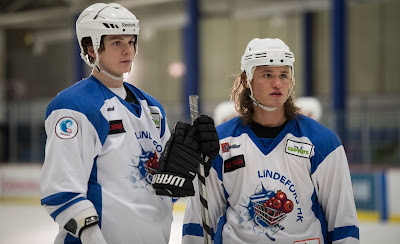 Hockey, the greatest game on the planet, played by over 1.2 million kids a year in North America, all with a dream of one day playing the game in the NHL. Over time many lose that desire to continue playing the game as a career, but for a few the dream lives on. Odd Man Rush is the story of those guys who, for whatever reason, did not become one of the 200 kids to get selected in the NHL draft, but still try to get there by any way possible.

Based on the memoir by Bill Keenan (Odd Man Rush: A Harvard Kid?s Hockey Odyssey from Central Park to Somewhere in Sweden?with Stops along the Way) and directed by Doug Dearth, the film focuses on the so-so hockey career of Bobby (Jack Mulhern), who racks up more injuries than goals playing stateside and finds himself bouncing around in the European minor leagues, where he is ignominiously traded to a Swedish team for a washer/dryer combo.

He falls for Elin (Elektra Kilbey) and is forced to choose between his dream on the ice and the cold hard fact that not everyone makes it to the NHL.

Odd Man Rush hits a note that few movies about the sport usually do, one that isn't played up for laughs or only shows the highlights. No, this is a look at the cost of following a dream to point where you have to ask yourself "is it worth it?"

The answer, just like real life, isn't a simple one and one scene in film sums this up perfectly. While at the bar Bobby and a teammate have a conversation about what they would be doing if they were more skilled. The response is that they would be doing the same thing they are doing right now, just with more money and does the level at which you play really matter as long as you are enjoying it and living off of it.

It is the question that has multiple answers for each person who asks and Odd Man Rush does a terrific job of showing that following your dreams sometimes has a price, but that price doesn't always have to be negative even when the outcome isn't exactly what you desired.