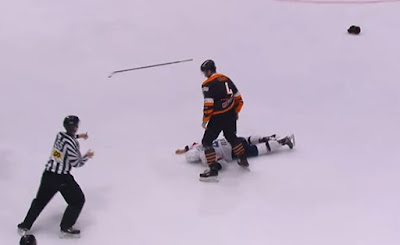 Mark Louis and Patrik Maier dropped the gloves and the results lasted four minutes as Maier had to be boarded off the ice after receiving the right hand of death.

In the Slovak Tipos Extraliga Dukla Michalovce defenseman Mark Louis quickly won his fight with Slovan Bratislava's Maier, delivering a brutal right hand which instantly sent Maier crashing face-first onto the ice.
The 24-year-old remained motionless as both teams watched on with concern before a stretcher was finally brought onto the ice to take away the stricken Maier, who was seen holding a bloodied hand on his head.  Luckily, Maier did later come to his senses although could not recall any details of the incident which rendered him unconscious.