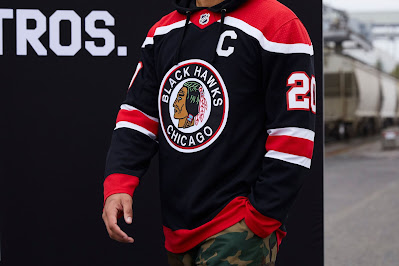 When listing the winners and losers of the Reverse Retro Jersey release you will find one jersey absent; The Chicago Blackhawks. Instead of showing the front, like the other 30 teams, the Blackhawks opted to show off the back and that was it. But after three days an official photo of the front has been released.

In my eyes all the jerseys were losers, but ironically the one they didn't show is the best one out of the bunch. The color scheme is perfect and the front logo is super crisp and clean. Now, if I had to choose one this would be it and I'd enjoy wearing it.

The Blackhawks have responded to Jersey-Gate with the following statement:

"The full jersey is featured in our Club’s launch video posted to team channels this morning, and you can also find a still on our merchandise-focused channel."

I'm sure there was no intentions of hiding the logo... But there was...

In trying to hide the logo and not just roll it out with the other teams, they made this more than it needed to be. It feed into all the woke whites who are offended on the behalf of others and made it the focus of the entire line.

Instead of feeding into the fake outrage of the logo why don't you point them into the direction of the Cleveland Indians.

Chief Wahoo is a caricature of deep disrespect, Chicago Blackhawks logo is not.