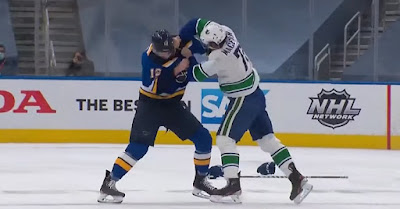 It was the battle of the Zack's as Zack MacEwen and Zach Sanford argued about the correct way to spell 'Zack' during the faceoff line up before dropping the mitts and throwing a couple haymakers when the Vancouver Canucks took on the St. Louis Blues in game 2.

MacEwen lined up against Sanford for a face-off but before the puck could be dropped MacEwen said "you know it's spelled with a K and not an H, right?" Sanford didn't like that and gave MacEwen a little chop and said "Mom says the H is the right way."  MacEwen retorted " Your mom is dumb and it ain't my fault she cant spell, ZacK." Sanford replied "Hey, you don't say that! Those are fighting words!"

Winner: Zack MacEwen, because it is spelled correctly with a K.

Bo Horvat scored two goals on the night as the Vancouver Canucks defeated the St. Louis Blues 4-3 in Game 2 of the Western Conference First Round.

Horvat scored shorthanded on an end-to-end rush at 7:23 of the first period by skating past Brayden Schenn and around Jaden Schwartz before flipping the puck past goalie Jordan Binnington to make it 1-0. His second came at  5:55 into overtime on a breakaway. Horvat currently leads the NHL with six goals in six games in the postseason.