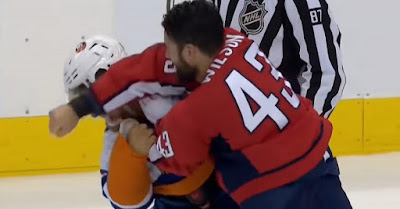 Washington Capitals forward Nicklas Backstrom was forced to leave the first playoff game of the series after a late hit by New York Islanders forward Anders Lee. In response, Tom Wilson grabbed Anders Lee in front of the bench and worked him over with rights to the face.

Prior to the actual fight a small scuffle broke out between John Carlson and, of course, Anders Lee. After missing all three games of the round robin, Carlson took exception to the hit on Nicklas Backstrom and dropped the gloves with Lee just 2:33 into his return and six seconds into his second shift.

Both players were given minor penalties for roughing. This series of events also led into T.J. Oshie scoring two goals on power-plays. But that light was quickly snuffed out when the Islanders came back to sore four unanswered goals.