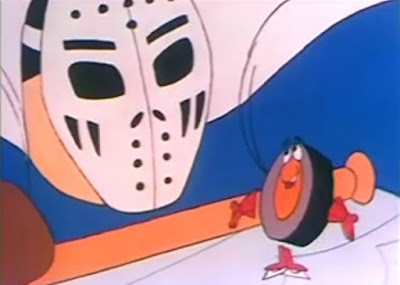 Peter Puck was the brainchild of Brian McFarland and New York Rangers season ticket holder Donald Carswell. Carswell conceived the idea and scripted the first drafts of the initial episodes.

Designed to help introduce and popularize ice hockey among non-fans (especially children), Peter Puck became an instant and enduring hit with existing hockey fans. When the network stopped carrying NHL games in 1975, NBC sold Peter's rights back to Hanna-Barbera, which later sold them to Brian McFarlane.

Brian McFarland was a longtime broadcaster and one of the main commentators on the Game of the Week. When he was with NBC in 1973, his boss, Scotty Connell, decided that NBC's intermission features needed to be more instructional in nature. He called Joe Barbera out at Hanna-Barbera, and said, 'We need a little animated character to describe hockey.' NBC asked McFarland to send Hanna-Barbera some of his literature on hockey and describe what offsides, icing and other infrasctions were.

When they were done, Hanna-Barbera created a talking, skating, wisecracking hockey puck. Joseph Barbera, president of the cartoon studio, gave the character the alliterative nickname of "Peter Puck."

For two years on the NBC NHL Game of the Week and five more on Hockey Night in Canada, Peter Puck educated and entertained the home audience, keeping them from changing channels during intermissions.

Each episode took place in the middle of a fast-paced animated hockey game. The instant Peter noticed real-live viewers were watching the game, he would say hi, skate up to the camera, and begin describing rules and concepts of hockey. Many times he would use the players and the officials in his hockey game to show how plays are set up, what hand signals are used when describing penalties, and how to differentiate icing from a two-line pass.

Meanwhile, both the red-sweatered home team and the blue-jerseyed road team swatted Peter around, often in the middle of his lessons. Sometimes the players apologized for hitting Peter so hard with their slapshot; other times Peter would wise off about the goaltenders and their 1960's face shields.