Pittsburgh Penguins' John Marino Had Goal of the Year 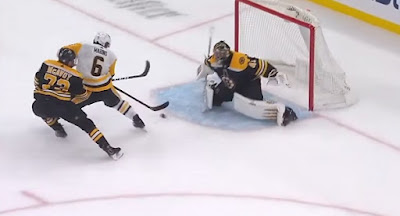 November 4th, 2019 is a date that Defenseman John Marino, of the Pittsburgh Penguins, will not soon forget.
Marino was selected in the same draft year as Connor McDavid and for whatever reason chose not to play for a team that had just received the, arguably, best player in the league. Call it fate, call it karma or call it having the foresight to know one man couldn't turn a whole team around over night, he went to Harvard. But the moment the Penguins picked up his contract, he ditched school and jumped right into the league.
Marino instantly made an impact when he joined the Penguins in preseason and there were no signs that the club had any intentions of sending him down during regular play. However, on the night of November 4th, 2019 it looked like Marino might not be as prepared to play in the NHL as many had thought.
To set the scene, you need to know three thing: One, John Marino is from Boston. Two, the game on November 4th was against Boston. And three, Marino had not scored his first NHL goal yet. Those three details are key as to why this goal is so special.
Late in the second period Marino took a two-minute minor penalty and to make matters worse the game was tied 3-3. Some how the Penguins managed to kill off this penalty and with 8 seconds left on the clock gained control of the puck just as Marino was exiting the box. A quick backhand pass up the center put the puck on his stick with 6 seconds left. Darting up the ice like a bolt of lightning saw Marino all alone, he moved forehand, backhand, forehand and at the moment he opened Halak up. Marino knew he had him and went to the backhand for a easy tap-in, five-hole to put the Penguins up 4-3 at the end of the 2nd period.
John Marino, a kid from Boston, who was  playing college hockey a few months earlier, just scored his first NHL goal, in his hometown, in front of his friends and family, after taking a two minute penalty is not just amazing... It is cinematic.
Share IT
FaceBook Twitter