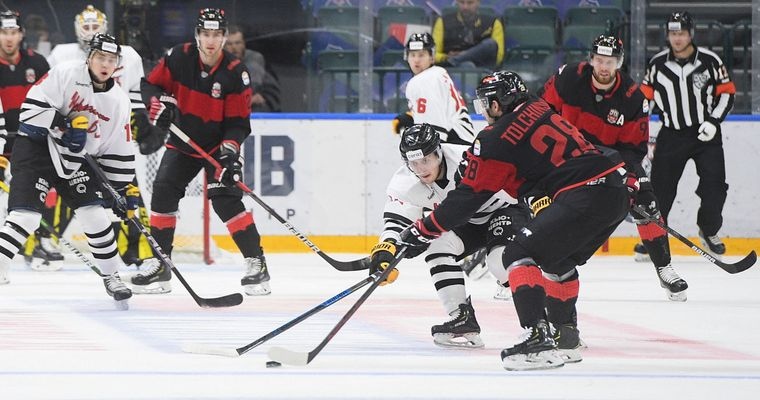 Nikita Komarov of Avangard fights another player from Severstal during  preseason gameplay.

The first rival of the Cherepovets in the tournament. N.G. Omsk Avangard became Puchkova. For Omsk, the game with Severstal was the second: the day before, the red-blacks played in St. Petersburg a game with Torpedo Nizhny Novgorod, in which they won a strong-willed victory with a score of 4: 2. The nominal guests started the first period actively, trying to gain a foothold in the opponent's zone. On the 6th minute, Severstal earned the first penalty, but Avangard was unable to realize the penalty. At the 13th minute, the Cherepovites opened the scoring, and after 4 minutes they increased the gap. In the last five minutes of the period, the nominal guests scored the third goal, but the referees decided to cancel the goal - the puck was thrown by hand.

In the second period, Severstal calmed down somewhat, began to make mistakes, which was used by the rivals. On the 26th minute, Omsk reduced the gap to a minimum, and then, using the numerical majority, leveled the score. The teams tried to impose their game on each other and received two retaliatory deletions. Within two minutes the game was played in 4x4 format. On the 38th minute the team of Cherepovets managed to regain the advantage in one goal, while the Omsk people tried to recoup, but the opponent's goal was unapproachable.

In the third period, Avangard established a foothold in the Severstal zone. The Omsk people were able to equalize and then increase the gap by two goals. The red-blacks played in a forceful manner and received three penalties in a row. The nominal guests took a chance and removed the goalkeeper. The game was played in 6x3 format, but the numerical majority was not realized. Until the end of the third period, the team of Cherepovets played without a goalkeeper, which was used by the rivals, scoring the sixth goal into an empty net.

How about these refs' white gloves. #KHLPreseason