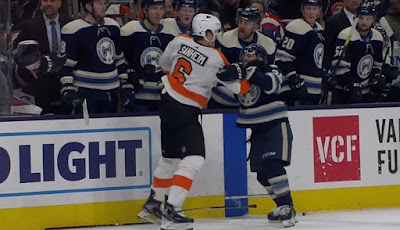 Nathan Gerbe (5' 4'') just tossed Travis Sanheim (6'4') during the Columbus Blue Jackets vs Philadelphia Flyers game and it was hilarious.

The Flyers might be the last team the Blue Jackets want to see at the moment, at least based on how the season series has gone. One year after being swept by the Blue Jackets in all four games.

It's a deep team when it comes to offense, as nine different players have at least 10 goals. Center Sean Couturier is having a fantastic year, as he leads the team in scoring with a 18-35-53 line and is plus-20. Travis Konecny is atop the team's goal-scoring chart after reaching 20 goals Tuesday night and has 51 points overall, while Claude Giroux has a 16-30-46 line and former CBJ forward Jakub Voracek is right behind at 12-33-45.

The Flyers were able to come back and defeat the Blue Jackets in OT 4-3.