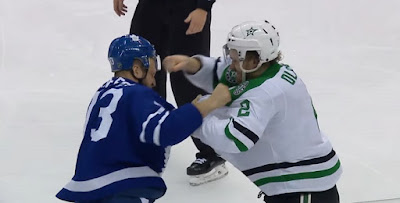 Kyle Clifford stepped up in a huge way for the Toronto Maple Leafs on Thursday night during their game against the Dallas Stars.

Clifford took on the big guy, Jamie Oleksiak, at center ice right after a face-off. The two wasted no time in locking up and instantly starting throwing bombs at one another. Oleksiak looked like he had the upper hand at the start of the bought, but Clifford came back with a few monstrous blast of his own. One of the hits being a huge haymaker that sent Oleksiak tumbling to the ice.

Both Oleksiak and Clifford were taken to the box of shame and given five for fighting. The fight took place with 5:55 left in the 2nd period.

The Dallas Stars lead the Toronto Maple Leafs 2-1 at the end of the 2nd period.