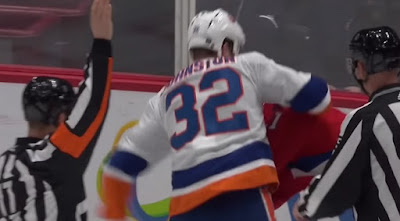 The Islanders held Alex Ovechkin at bay Monday night, keeping him two shy of reaching 700, but importantly, they held a lead and beat the Washington Capitals 5-3.

Anthony Beauvillier scored twice in the first period for the Islanders, who split the four-game season series with the Capitals as the road team won each time. Josh Bailey and Brock Nelson each had three assists and Thomas Greiss made 25 saves.

The Islanders opened a 3-1 lead after one period, with defenseman Devon Toews cutting to the crease to take Bailey’s feed for a four-on-four goal at 18:06 and then just turning away without much of a celebration.

Beauvillier had made it 1-0 at 3:30 of the first period, taking a feed from Bailey to complete a three-on-two rush. Beauvillier pushed it to 2-0 at 6:16 seconds after Samsonov was forced to make a point-blank save on Bailey as the Capitals fumbled the puck deep in their zone. Samsonov kept the Islanders from opening a three-goal lead with a sprawling save on Ross Johnston’s backhander at the right post at 10:23 and defenseman John Carlson cut the Capitals’ deficit to 2-1 at 12:55 with a shot from the right point that deflected off defenseman Johnny Boychuk’s knee. Ovechkin was battling with Boychuk for position in front of the crease and the goal was reviewed to see whether the puck had deflected off of him instead.