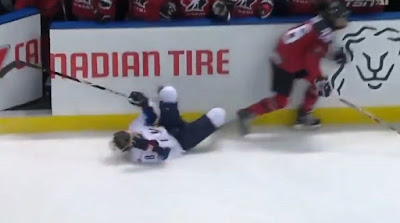 The third contest of the 2019-20 Rivalry Series between team Canada and team USA took place this Monday and it was something.

Team USA won the first two games in December, by scores of 4-1 and 2-1. In the first game, Amanda Kessel and Alex Carpenter both picked up a goal and an assist, and Abby Roque scored her first senior international goal. Alex Cavallini made 32 of 33 saves; at the other end, Geneviève Lacasse stopped 27 of 31 shots for Canada.

In game two, current Northeastern junior goaltender Aerin Frankel stole the show for the United States, stopping 27 of 28 shots and holding tight to the one-goal lead in the third period, when Team USA was out-shot by a 12-3 margin. Roque and Carpenter scored again in that second game, and Ann-Sophie Bettez notched her first international goal for the Canadians.

However this time around team Canada came out swinging. Just 1 minute into the first period the puck was coming down the boards into team Canada's zone. Emily Matheson was in hot pursuit of said puck but Emily Clark was not going to let that happen. Clark dropped her should, lined Matheson up and delivered a perfectly reasonable body check. Yep, a play that you have seen a 1,000,000 million times in real hockey drew a gasp from the the crowd and sent Clark to the box of shame for 2 minutes.

Now that I've wasted your time and I have you here, how about we discuss what could make that game of Women's Hockey better? Let them play the game the right way. Teach checking to both boys and girls starting at the age of 10. Give them the chance to learn how to give and receive a check the proper way (Women's Collegiate Hockey has the highest concussion rate of all sports due to this oversight. See: Vox). Then don't separate them once they hit 18, let those who want to play the game, Play. The. Game.