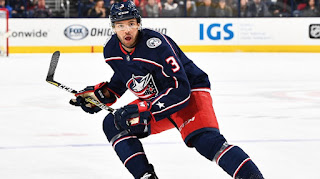 Seth Jones is out, and facing possible surgery, after he was placed on injured reserve with an ankle injury due to crashing into the net during the first period of the Avalanche game on Saturday. He returned for the start of the second and scored a power-play goal in a 2-1 loss at Nationwide Arena.

Defenseman Gabriel Carlsson was recalled from Cleveland and He is scoreless in six games with the Blue Jackets this season, but has three assists in 23 games with them since 2016-17.

Forward Liam Foudy was added to the Blue Jackets roster on emergency recall from London of the Ontario Hockey League.

The Blue Jackets are third in the Metropolitan and just one point ahead of the New York Islanders. They play the Tampa Bay Lightning tonight, February 10th, at home for the first time since sweeping them last season.


Update 2/12/20
Columbus Blue Jackets defenseman Seth Jones underwent successful surgery on his injured ankle on Tuesday. The team announced Jones is expected to be out for approximately 8-10 weeks.