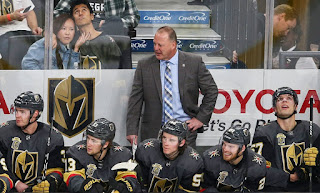 Vegas Golden Knights General Manager, Kelly McCrimmon, has decided to change the team's coaching staff. Gerard Gallant and Mike Kelly are out and Peter DeBoer is in as the new head coach.

"In order for our team to reach its full potential, we determined a coaching change was necessary. Our team is capable of more than we have demonstrated this season. We would like to thank Gerard and Mike for their service to the Vegas Golden Knights. They were both instrumental to the success we have enjoyed in our first two-plus seasons and we wish them all the best moving forward. In Peter DeBoer, we have a proven, experienced head coach who we believe can help us achieve our ultimate goal. We are excited to welcome Peter and his family to the Vegas Golden Knights organization. We look forward to a strong finish to the 2019-20 season with Peter at the helm and a successful tenure in the seasons to come."

DeBoer is expected to join the team on Thursday in Ottawa prior to the Golden Knights/Senators game at 7:30 p.m. ET.

Gallant was fired less than two years after winning the Jack Adams Award as NHL coach of the year for his role in helping the Golden Knights reach the 2018 Stanley Cup Final.