Reaves, Theodore and Marchessault Read Mean Tweets With Their Dads 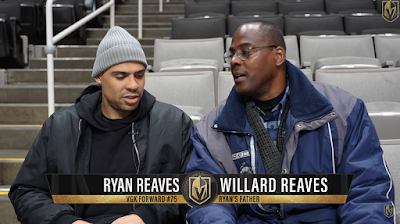 The Golden Knights fathers read mean tweets about their sons as part of the VGK Fathers Trip this year.

The Vegas Golden Knights are a professional ice hockey team based in the Las Vegas metropolitan area that competes in the National Hockey League. They are members of the Pacific Division of the league's Western Conference, and began play in the 2017–18 NHL season.

Ryan Reaves is a Canadian-American professional ice hockey right winger currently playing for the Vegas Golden Knights of the National Hockey League. He has previously played for the St. Louis Blues and Pittsburgh Penguins. Reaves has been described in the NHL as an enforcer.