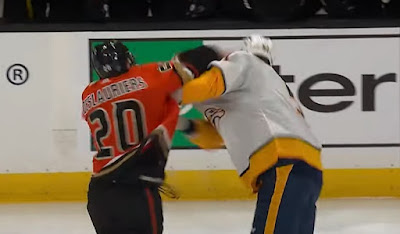 Austin Watson, you gotta feel for this guy. He gets beat-up at a gas station by his wife, suspended for 18 games and then returns only to constantly lose on-ice fights.

Watson's latest bout saw him drop the gloves right after the opening face-off during the Predators vs Mighty Ducks (yeah, they will always be the Mighty Ducks). Watson quickly realized this was not going to end well as Nicolas Deslauriers instantly landed blow after blow.

But, like a gentleman, Watson thanked Deslauriers for the beating and made his way to the box.