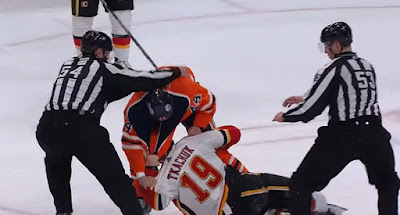 Tkachuk and Kassian started jawing at each other at 3:26 in the 1st period during a face off in the Flames zone. The moment the puck hit the ice the two had their gloves down and were going at it like two dogs in heat.

This round again goes to Kassian who had no problem working over Tkachuk for the second time this season. Although it is nice to see that Mathew stepped up and answered the bell this time.

Battle of Alberta is back and it looks glorious!