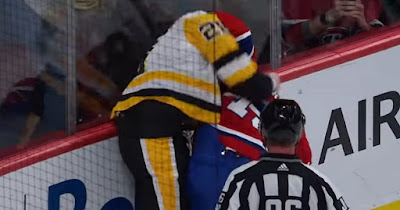 When Max Domi gets into a fight he usually wins, so imagine my surprise when Marcus Pettersson, the guy who never fights, gripped his ass up, beat the back of his brains in and then rode him to the ice for a child-like time-out. What makes these series of events even more funnier is that Domi instigated the entire thing in a half-ass attempt to "wake his team up" only to look like a field mouse gettin bopped by little bunny FooFoo in front of his home crowd.


Max Domi was selected by the Phoenix Coyotes in the first round (12th overall) of the 2013 NHL Entry Draft. He was selected by the Kingston Frontenacs with the eighth pick of the 2011 Ontario Hockey League (OHL) draft, but was subsequently traded for three second-round draft picks to the London Knights.

Marcus Pettersson was selected by the Anaheim Ducks in the second round (38th overall) of the 2014 NHL Entry Draft. On June 13, 2015 Pettersson was signed to a three-year entry-level contract with the Anaheim Ducks. He was called up to the NHL on 21 February 2018 and recorded his first NHL goal on 4 March, in a 6–3 win against the Chicago Blackhawks.