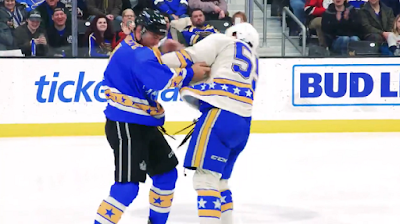 During the St. Louis Blues alumni game, Paul 'BizNasty' Bissonnette and Cam Janssen went Old Time Hockey and had a little tilt on the ice. Of course it was nothing serious and was all in good fun as you can clearly see both men grinning ear-to-ear while engaging in the slobber-knocker.

Before some of the NHL's biggest stars take the ice at Enterprise Center for the 2020 Honda NHL All-Star Weekend, many of the Blues' biggest legends will be lacing up the skates yet again at Centene Community Ice Center in Maryland Heights.

Fan favorites such as Barret Jackman, Geoff Courtnall, Doug Weight, Cam Janssen, Garth Butcher and more are expected to take the ice for the Honor the Past: NHL Alumni Game presented by Bud Light on Thursday, Jan. 23 at 7 p.m. The game will also feature former NHLers such as Joey Kocur, John-Michael Liles, Douglas Murray and Jody Shelley.

THAT. JUST. HAPPENED!!!@CamJanssen25 and @BizNasty2point0 dropped the gloves just like they did back in the day. #stlblues pic.twitter.com/9N45cNphns
— St. Louis Blues (@StLouisBlues) January 24, 2020